Why this baby is squished into this glass tube 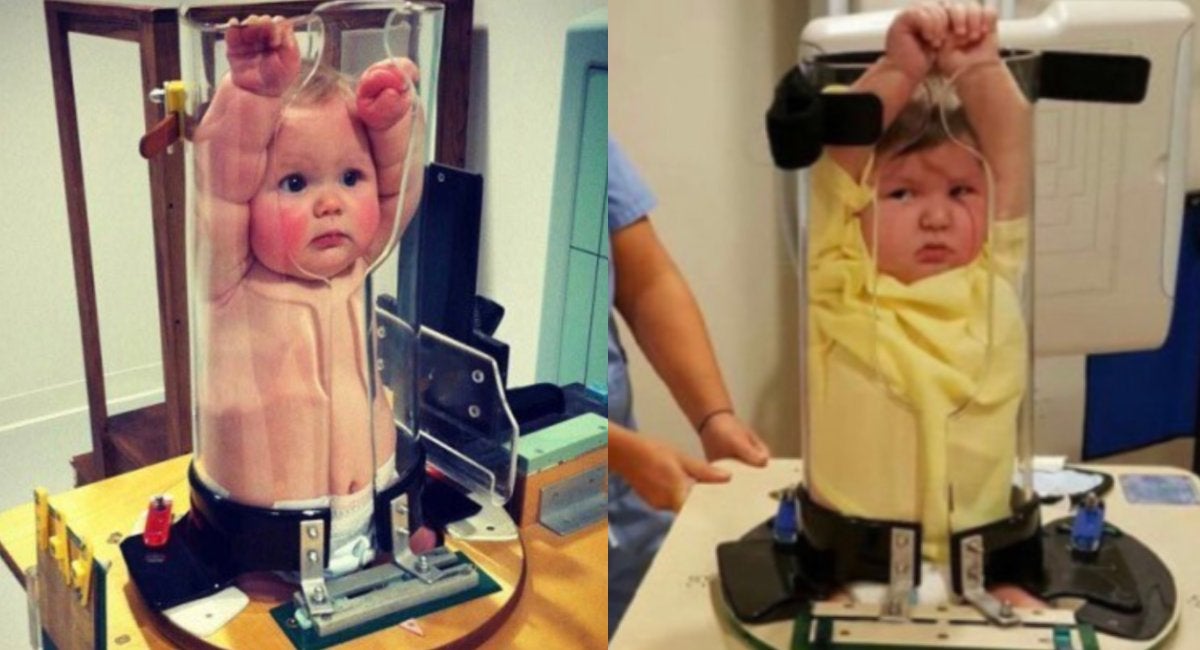 It looks like something used for punishing a misbehaving toddler or even a torture device. However, you’d be surprised to learn there’s actually a medically sound reason for this rather uncomfortable looking gadget.

Photos of children seemingly stuck in giant test tubes are doing their rounds on social media. On the one hand, they look hilarious and you really can’t help but laugh. On the other hand, the mother in you is probably filled with worry and concern about the wellbeing of these children. The consolation is that they don’t look too traumatised, merely confused or unimpressed.

Just what is going on here? And who is imprisoning all these poor children?

It would appear the device is called the Pigg-O-Stat, “the world’s top clinically-proven, time-tested and medically-trusted paediatric immobiliser”. Used since 1960, the Pigg-O-Stat is designed “positioning infants and young children for an appropriate x-ray without significant complications”.

In other words, if your baby needs an x-ray and won’t stay still to get one taken (because really, which child would?), out comes the Pigg-O-Stat. X-ray technicians won’t need to constantly retake images or try to pin the child down themselves, both of which can increase radiation exposure for both technician and child.

That hasn’t stopped Reddit users from having a uproarious time at the expense of these poor children though:

“This is what happens when the fat kid falls in the chocolate river.”

“I thought this is where baby oil comes from.”

“I couldn’t stop laughing when my son was getting his. He was so awkwardly cute.”

“In some hospitals they use an old tube system to transfer babies to different departments. It’s all air powered so no harm will come to them. Typically they reach speeds of nearly 85MPH.”

How do they X-ray a baby?

How do children react to the Pigg-O-Stat? On the Reddit thread, many say their children were far from happy about being trapped in it. “My toddler got an x-ray in this fashion and she screamed the entire time, as it was very uncomfortable. I had to try and maintain some composure while it was happening—it was heartbreaking to watch,” said user mhfc.

However, fellow user standard_baby had a different experience: “My daughter was in one of those when she was just turning two. She’s usually going to cry about anything out of the ordinary but not not this, for some reason. However, while she was being stoic in the area above the table, her legs were cycling a hundred miles an hour the whole time, not unlike Scooby and Shaggy when they are scared and have begun to run but haven’t yet moved.”

Don’t expect a radiographer to be wheeling the Pigg-O-Stat contraption out in Australia though. The Australian Institute of Radiography is not aware of the device being used in the country. At the same time, x-rays in Australia are not necessary most of the time, “since Australian kids are immunised and there are also less communicable diseases,” says a paediatric doctor.

“X-rays take a very short time,” he continues. “Putting a child into that device would take time and could make the child cry.

“In Australia, parents put on a lead apron (which shields them from the radiation) and then hold the child. Mothers are always asked if they are pregnant if they are the one holding the child.”

To be honest, we’re glad they do it differently in Australia.

You probably never thought your son may have this